We were thrilled that this production of ‘Jesus Christ Superstar’ was awarded the coveted Minack Trophy for the most outstanding production of the 2010 season.

Minack Theatre on the cliffs at Porthcurno.
Monday 31st May to Friday 4th June 2010

Jesus Christ Superstar the story of the final six days in the life of Jesus Christ told through the troubled eyes of Judas Iscariot.

This iconic rock opera pulses with energy and contains some of the most well known musical numbers from the last 40 years – ‘I Don’t Know How to Love Him’, ‘Heaven on their Minds’, ‘Hosanna’, ‘Gethsemane’ and of course ‘Superstar’.

Our production coincided with the 40th anniversary of the original concept album and was the first time that this show had been presented at the Minack Theatre.

Jesus Chris Superstar was produced by Richard Allen and Neil Reynolds joined us for the first time as Director. We once again welcomed Ian Skipper as Musical Director and Fran Reynolds as Choreographer.

As with all previous Minack tours, the technical team was headed up by Bruce Reed (Technical Director) and our Stage Manager was Malcolm Le Croissette, with Jill ‘Wigs’ Wilson as Production & Set Designer.

This production featured a cast of 50 performers and around 120 people joined us on tour in Cornwall.

A miracle would have been welcome at the Minack on Monday but, although we were in the presence of the great miracle worker himself, Jesus Christ Superstar, and perhaps because, after all, it was a bank holiday it was not to be.

However, although it rained from start to finish, it failed to prevent either the Surrey-based Barnstormers from coming up with a superb version of this Andrew Lloyd Webber and Tim Rice rock opera, or the majority of their huge audience from staying and enjoying its every gripping moment.

When first performed in New York, in praising it one of the city's critics reckoned it would be around for a long time to come. That was all of 40 years ago and it is still going strong.

Directed by Neil Reynolds and played in modern dress which, with its men in suits and shades, its guards with their riot shields, and a populace ready to shout "Hosanna" as well as and, almost in the same breath, "Crucify him", adds to its relevance.

Choreographed by Fran Newitt with musical direction by Ian Skipper, the patterns of movement are as varied as they are vibrant, the band is splendid, and the ensemble playing as disciplined as it is dedicated.

A word, too, for production designer Jill "Wigs" Wilson and technical director Bruce Reed, for everyone, in fact, who help make this production such an unforgettable experience. While its set pieces, The Last Supper to King Herod's Song, the suicide of Judas Iscariot to the Crucifixion, are supremely well staged, at the same time and, as it were, despite its rock 'n' rolling, foot stomping and swinging background, and the fact that its storyline is so well known, it is ultimately very moving.

While the sincerity of the large cast, whether apostles, dancers, soul girls, palm wavers or leading characters is as striking as the courage they displayed when singing and dancing in the rain on their opening night, there are particularly excellent performances from Helen Bartlett as the caring Mary "I Don't Know How To Love Him" Magdalene: Paul Longhurst who makes the very most of one of the show's top numbers "King Herod's Song": Sean Kingsley as the troubled Judas Iscariot who has more than heaven and pieces of silver on his mind; and Stuart Matthew Price who in the difficult role of the doomed Jesus Christ is, indeed and in every sense, a Superstar. 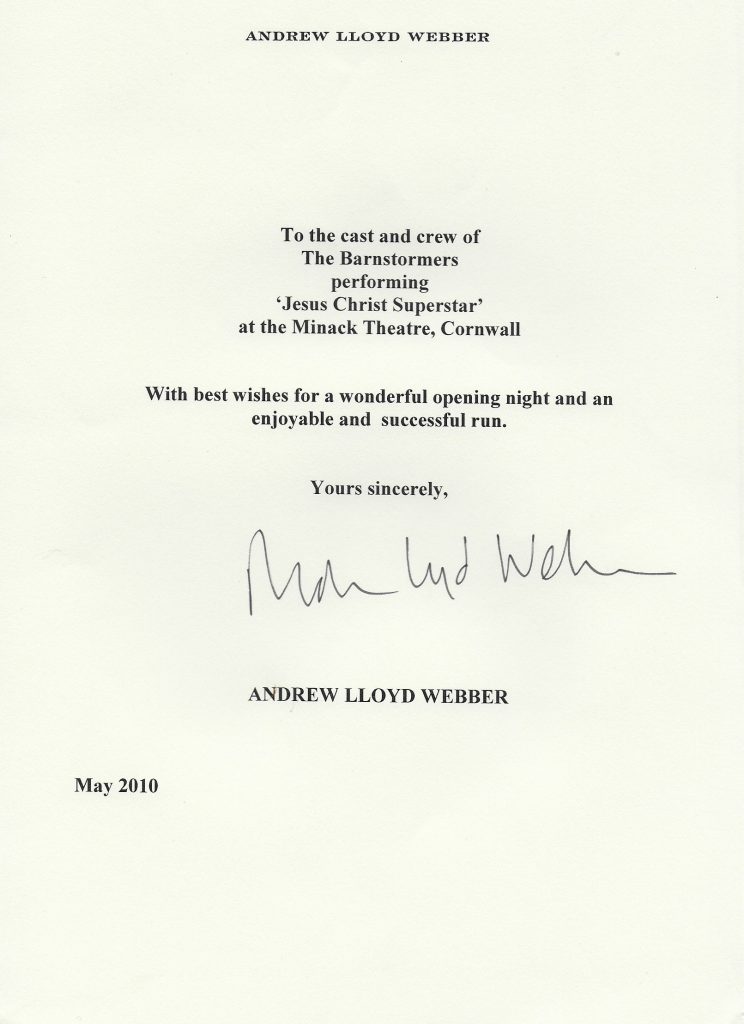 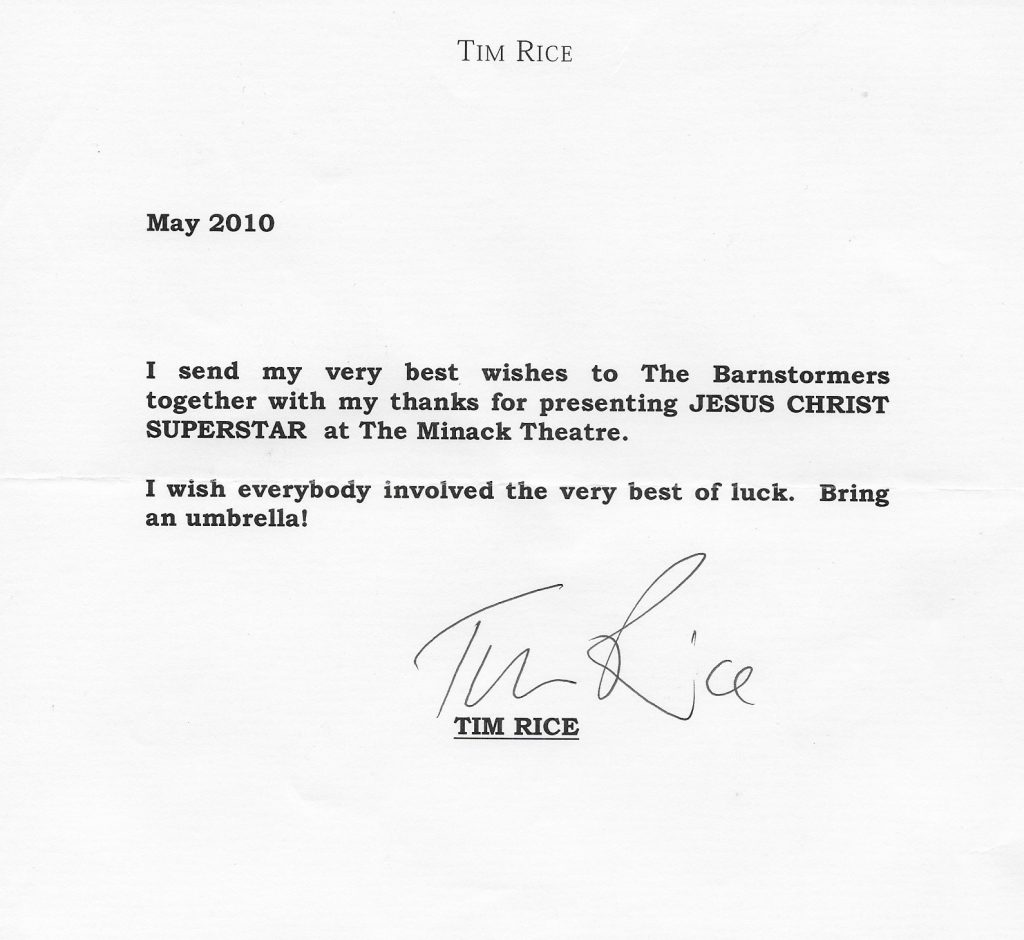 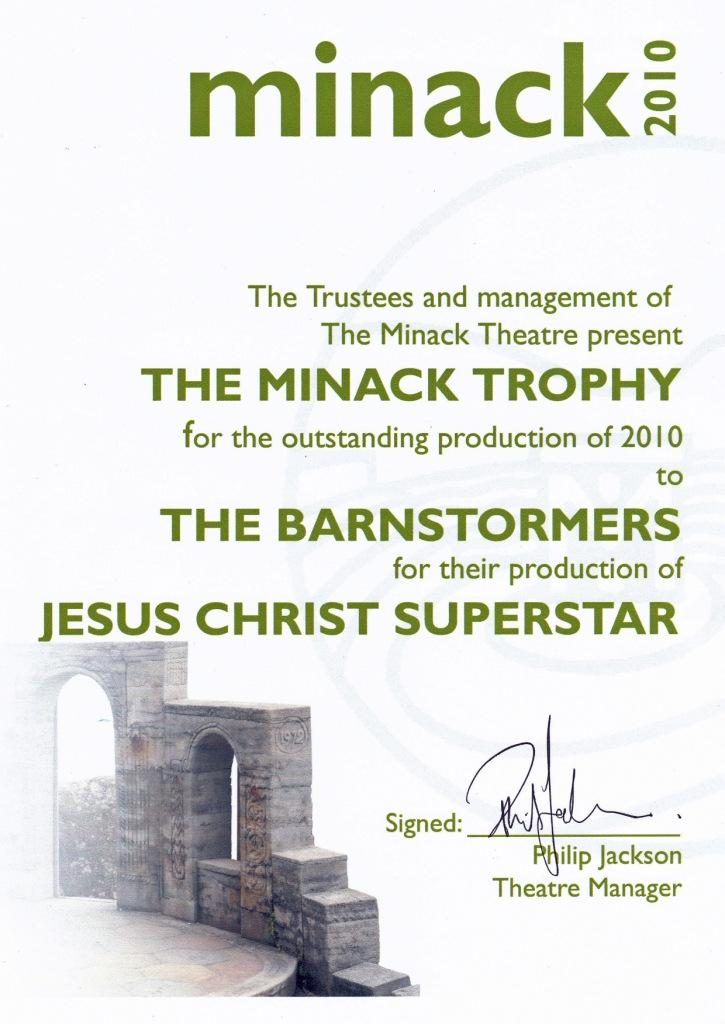 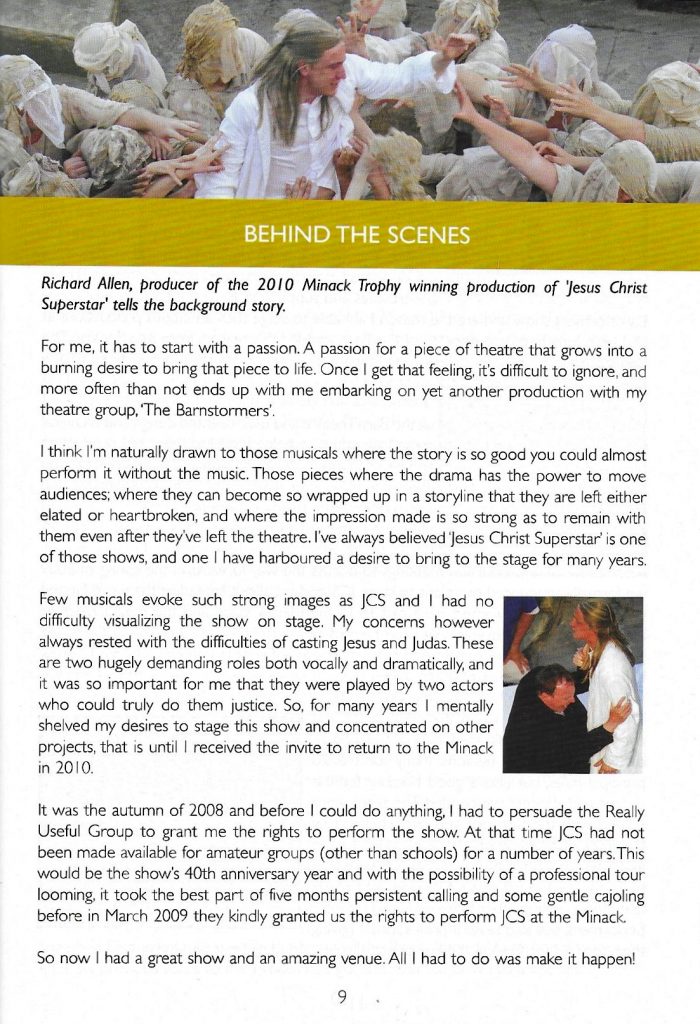 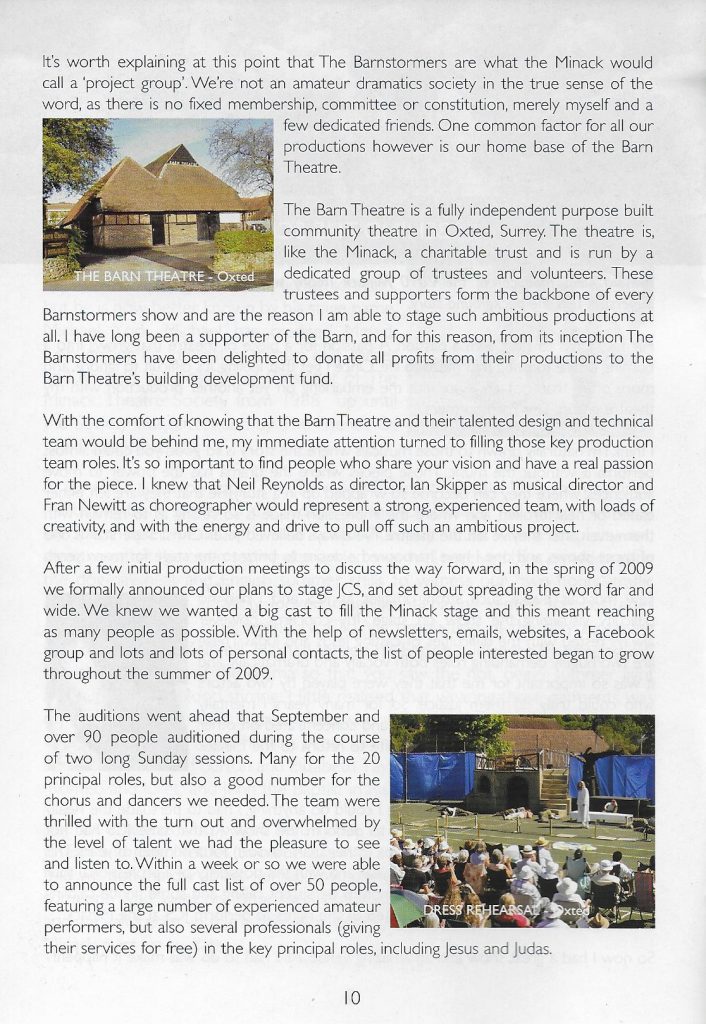 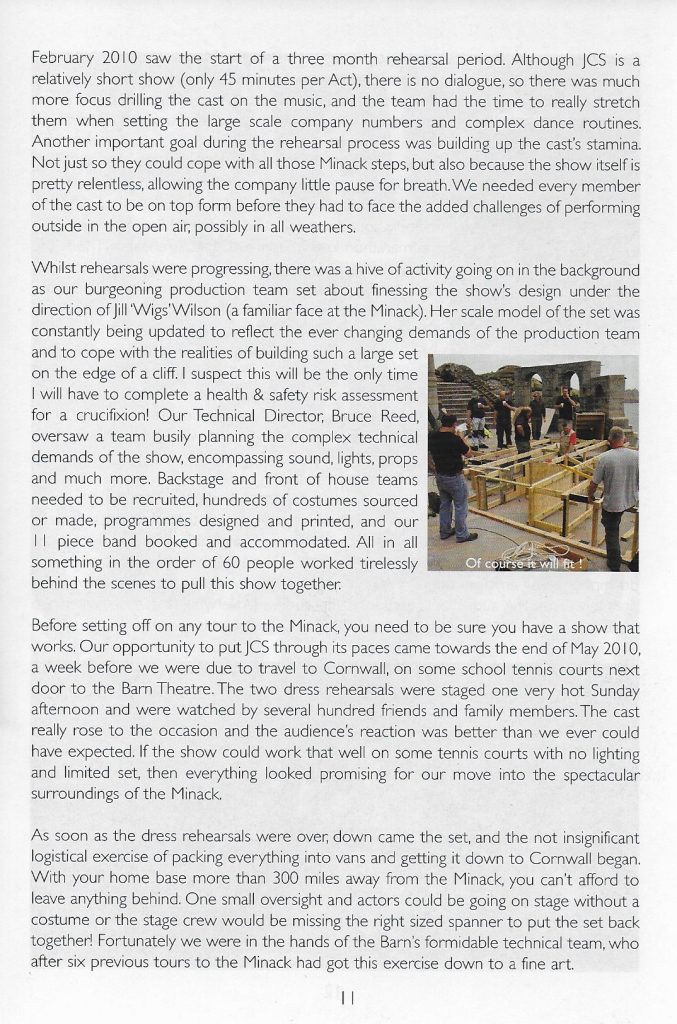 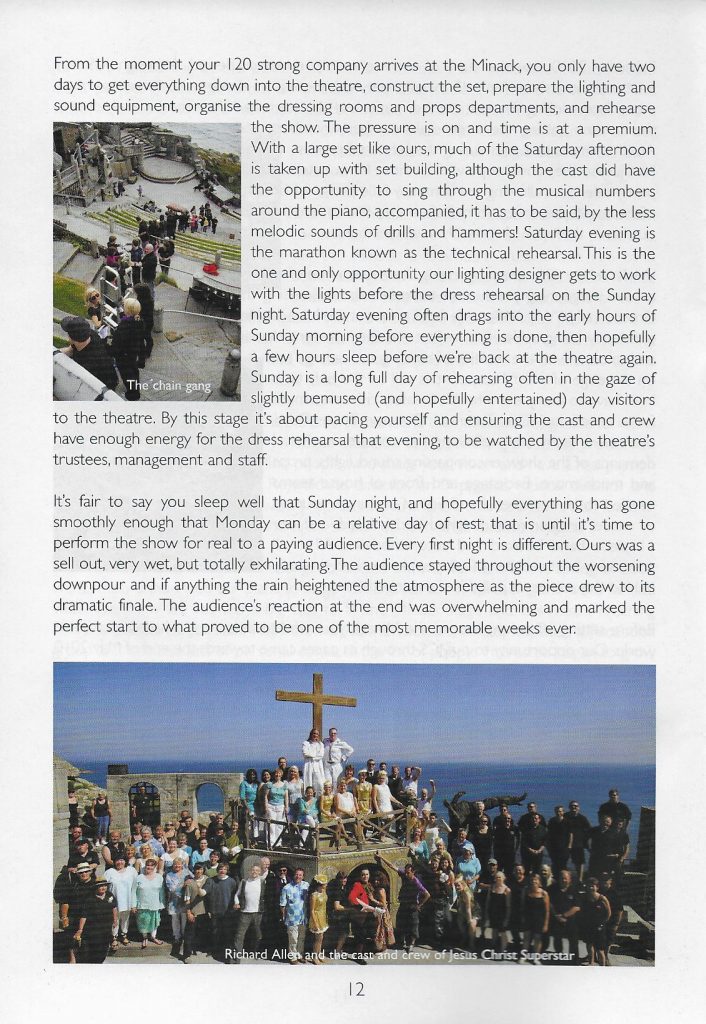