We were thrilled that this production of ‘Parade’ was awarded the coveted Minack Trophy for the most outstanding production of the 2013 season.

This was the first time ever that a touring company had won the trophy ‘back-to-back’ on consecutive visits to the Minack Theatre.

Previews in the Open-Air on the tennis courts of ‘The Larks’, Oxted.
Saturday 27th July & Sunday 28th July 2013

Minack Theatre on the cliffs at Porthcurno.
Monday 5th to Friday 9th August 2013

‘Parade’ is the true story of a tragic miscarriage of justice, brought to emotional and theatrical life by acclaimed playwright Alfred Uhry (‘Driving Miss Daisy’), with music by Jason Robert Brown (‘Songs for a New World’ & ‘The Last Five Years’).

Set in the Deep South of America in 1913, this multi-award winning musical features a powerful and gripping storyline and rousing and soaring music, drawing on influences from Sondheim to rhythm & blues, ragtime and gospel.

Leo Frank, a Brooklyn-born Jew living in Atlanta, Georgia, is put on trial for the murder of Mary Phagan, a young factory worker under his employ. The murder having taken place on the day of the Confederate Memorial Day Parade. Already guilty in the eyes of everyone around him, the sensationalist press, a politically motivated prosecution team and a janitor’s false testimony seal Leo’s fate. In fact, the only person who eventually steps forward in his defence is his wife, Lucille, who finds the strength and love to become his greatest champion.

The musical focuses on the evolving relationship between the accused, Leo Frank and his wife, Lucille, who fall in love in the midst of adversity.

Parade was produced by Richard Allen and was directed by Paul Longhurst. Patrick Isbell joined us for the first time as Musical Director and choreography was once again in the hands of Fran Newitt.

2013 marked the 100th anniversary of the original events that inspired this powerful musical.

The production featured a cast of 60 and over 120 people joined us on tour in Cornwall.

As with all previous Minack tours, the technical team was headed up by Bruce Reed (Technical Director) and our Stage Manager was once again Malcolm Le Croissette. Jill ‘Wigs’ Wilson returned as Production & Set Designer for the fifth time.

This is a magnificent musical, and a stunning and powerful production, but there isn't much Southern comfort in this true story surrounding the murder of a 13 year old factory girl in Atlanta, Georgia, and the conviction of her Jewish boss a century ago.

The title of the book refers to the Confederate Memorial Day Parade, during which young Mary Phagan is killed, after collecting her pay from Leo Frank, the factory superintendent, a fastidious and twitchy Jew, who hails from Brooklyn a long way to the north and is finding that "being in the South is like a foreign land''.

It was written by Alfred Uhry, who researched thousands of pages of testimonies from the month-long trial. Chief among Frank's accusers is Jim Conley, one of the factory's black workers, and it is that racial mix that sparked huge interest from the Press, and politically weighted public protests from all sides.

The award-winning Jason Robert Brown wrote the music and lyrics with the accent on the soul, gospel and blues of the South and The Barnstormers musical director Patrick Isbell and his orchestra, plus a huge cast and ensemble give us an aptly barnstorming blast of sound.
The stage is set by a huge American oak tree, brilliantly designed by Jill 'Wigs' Wilson with Martin Beatty, giving shade during the colourful flag-waving parade and the Governor's tea dance, and playing its poignant part in the ultimately shocking end, in this production by Richard Allen and director Paul Longhurst, choreographed by Fran Newitt, with costumes by Monica Mickels.

There are many principals both amateur and professional, and they are all outstandingly good, most especially Elizabeth Skinner as Lucille Frank, a superb singer and actor, Dominic Binefa, as her husband, Marcus Ayton as Jim Conley with his chain gang, Colin Warnock as the Governor, Steve Green as Dorsey, Charlotte Antoinette Mills, and Folarin Akinmade and Katanya Pierre-Louis, singing A Rumblin' and A Rollin'.

Was Frank guilty? We'll never know, but there's no doubt that the drama and intensity never waned on this Parade. 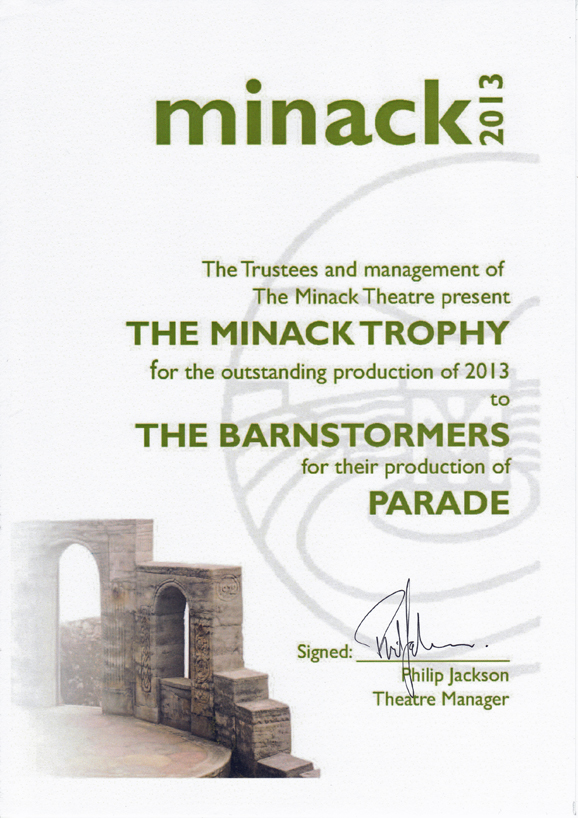