‘Putting It Together’ is a glitzy compilation show featuring the very best of Stephen Sondheim’s music.

With a cocktail party serving as a backdrop, the show takes you on a wonderful journey through the composer’s work and features some of the best-loved songs from many of Sondheim’s biggest hits including Company, Follies, Into the Woods, A Little Night Music, Dick Tracy, A Funny Thing Happened on the Way to the Forum, Merrily We Roll Along and Sweeney Todd.

Its combination of witty musical theatre numbers, love songs and sumptuous melodies certainly makes for a great night out.

This version of the show was lifted from the very successful 2000 Broadway revival production.

Putting It Together was directed by Richard Allen and Martin Patrick with musical direction by Ian Skipper. Our Choreographers were once again Jolene and Sophie Kiddle. 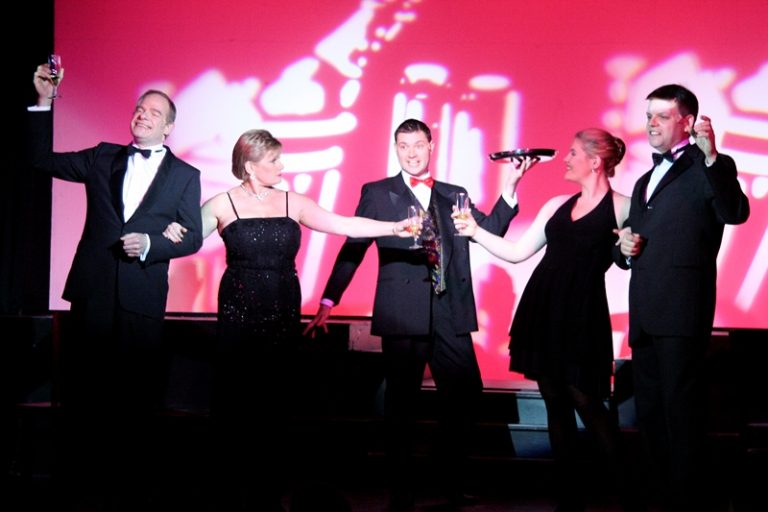 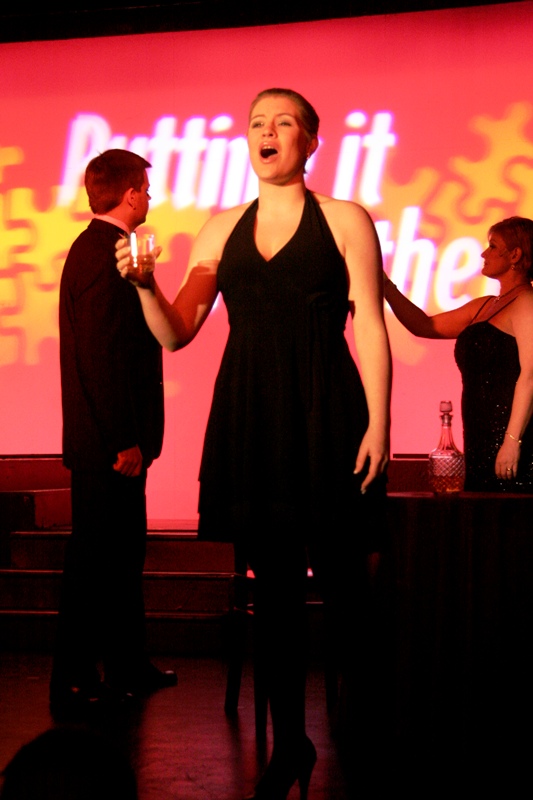 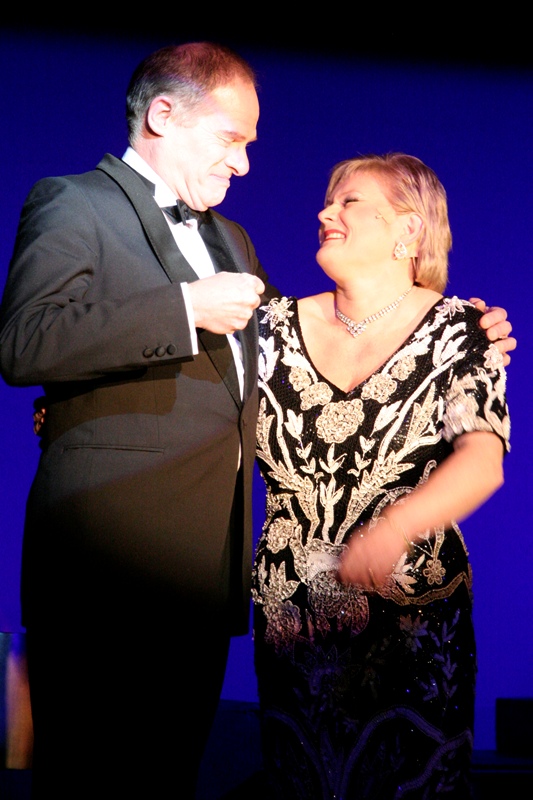 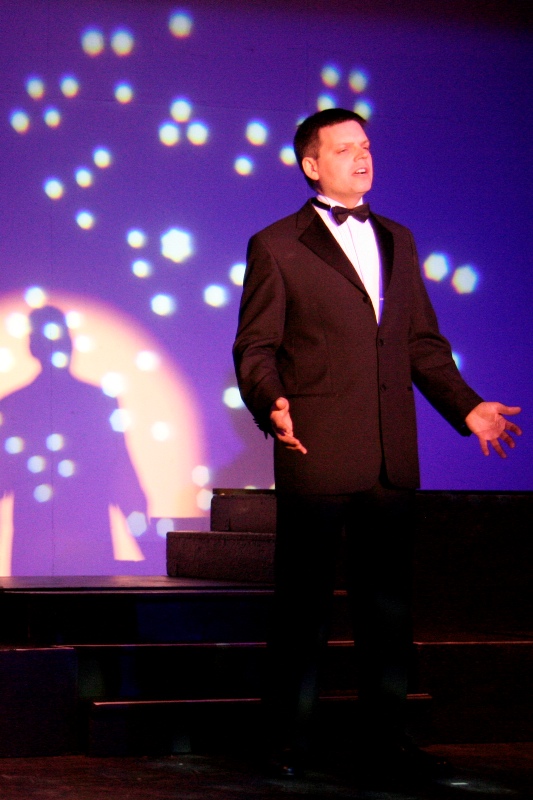 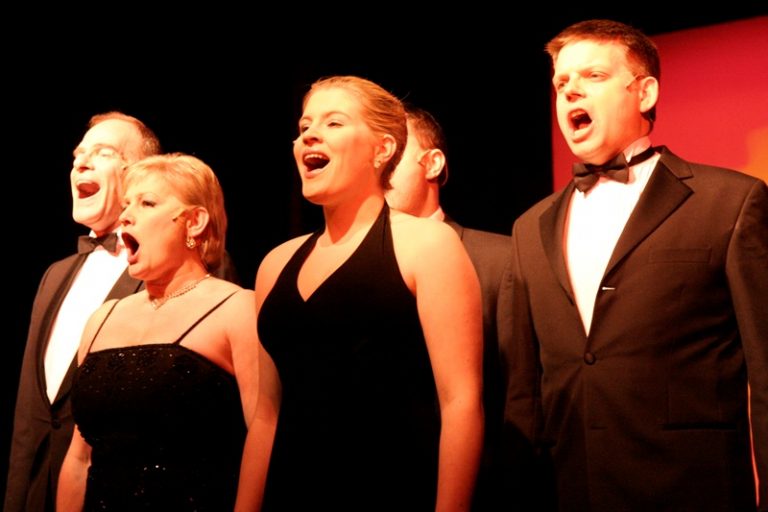 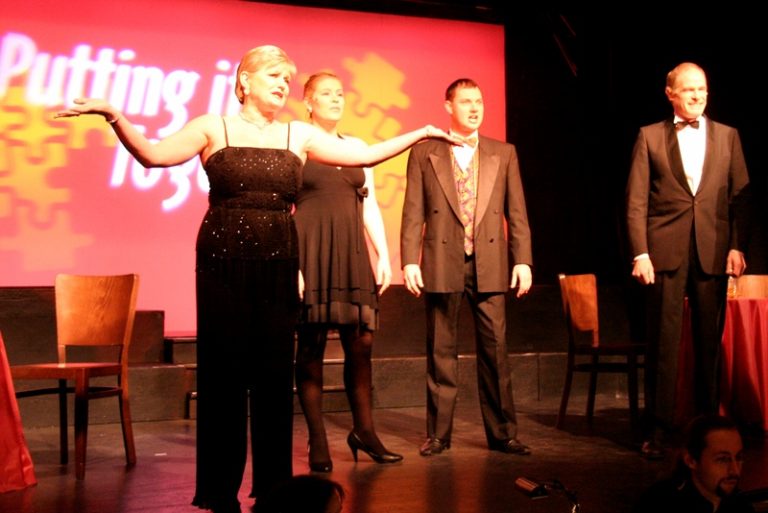 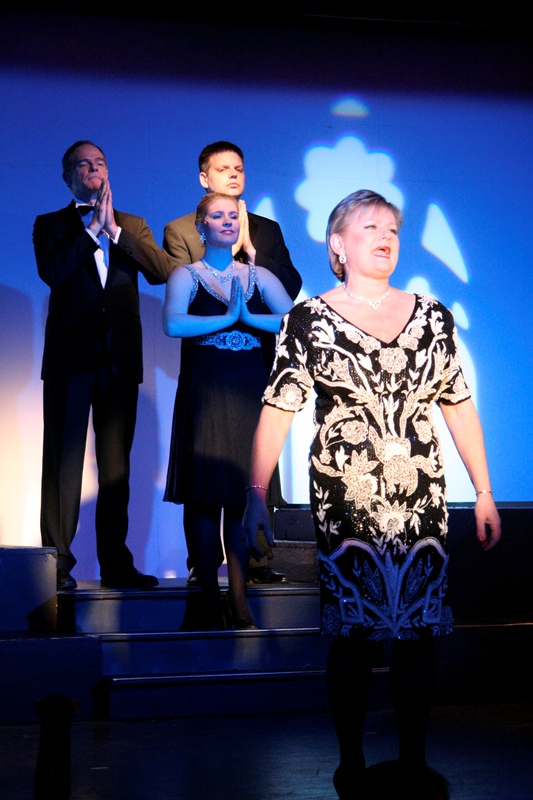 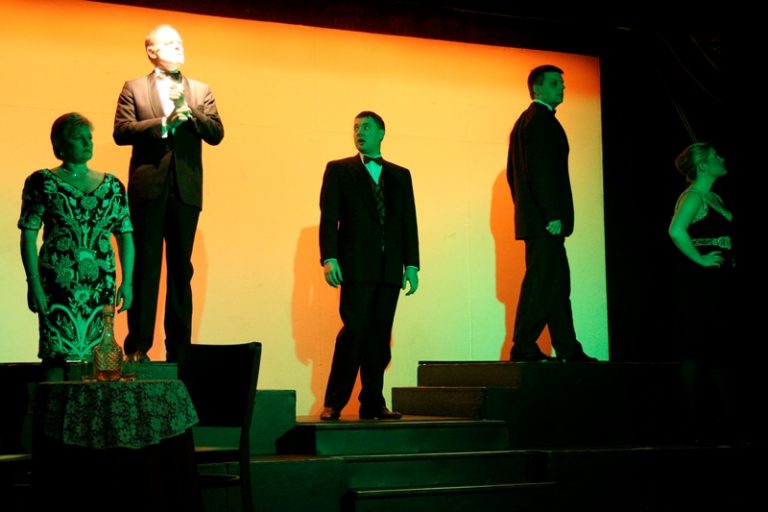 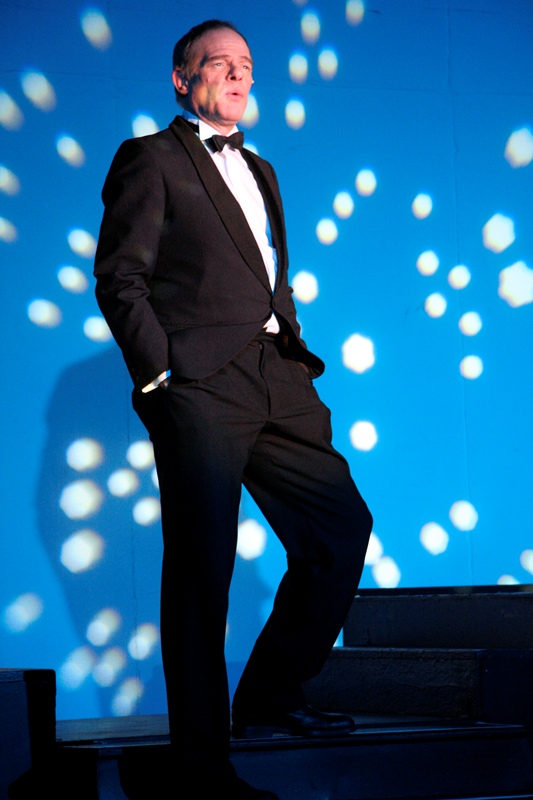 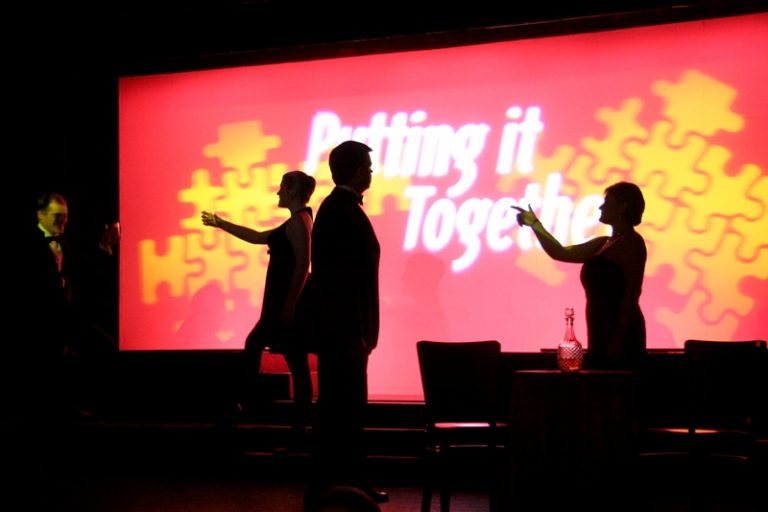 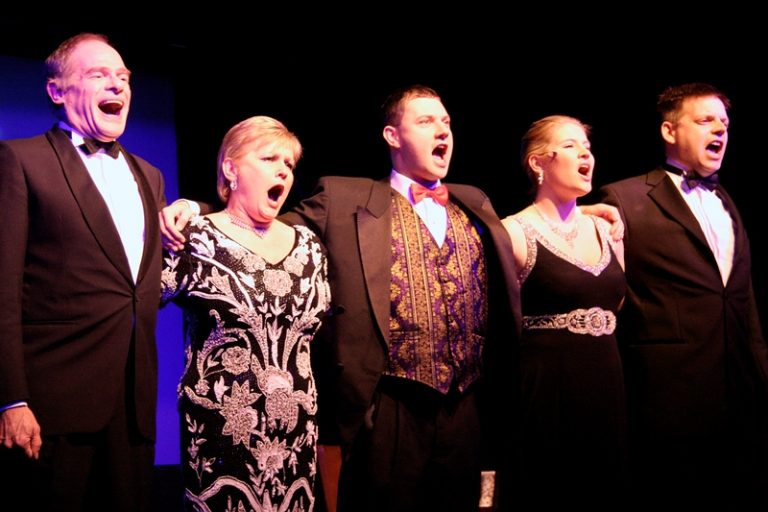 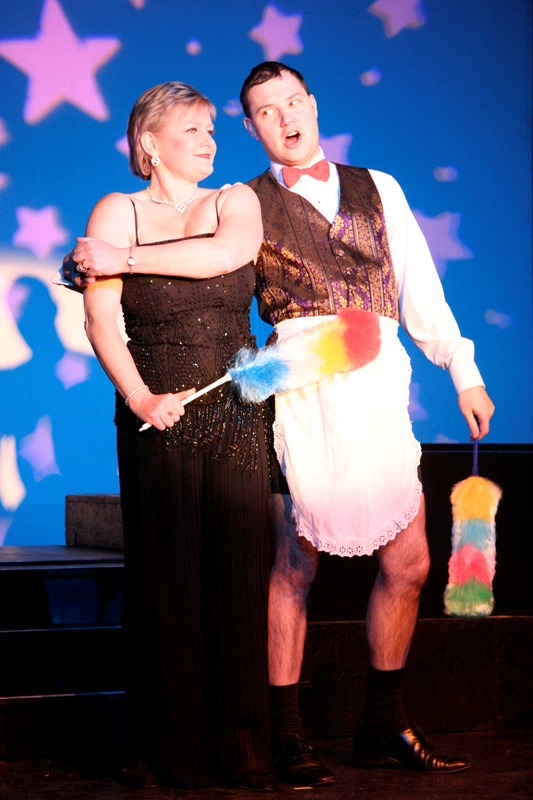 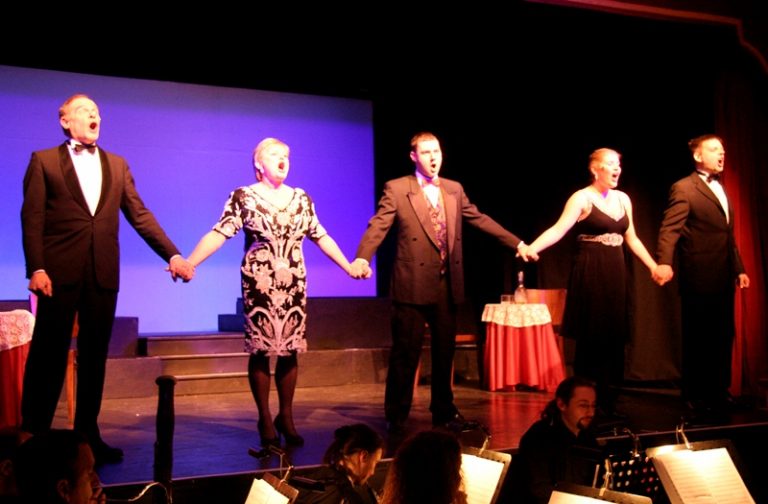 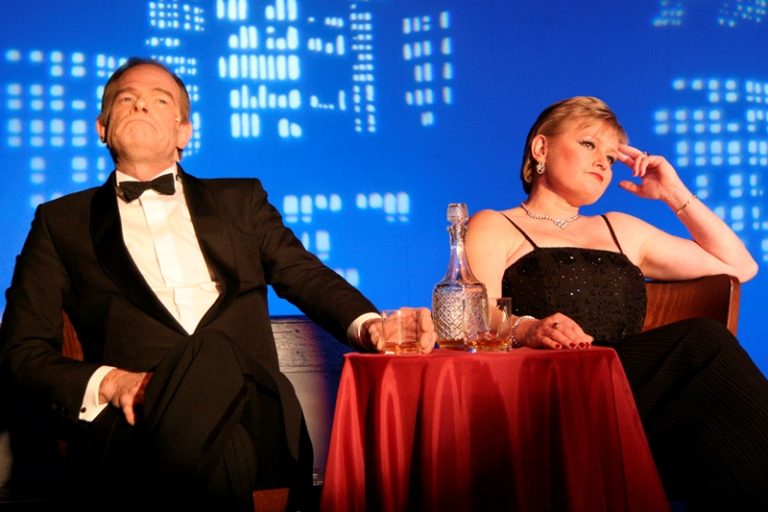 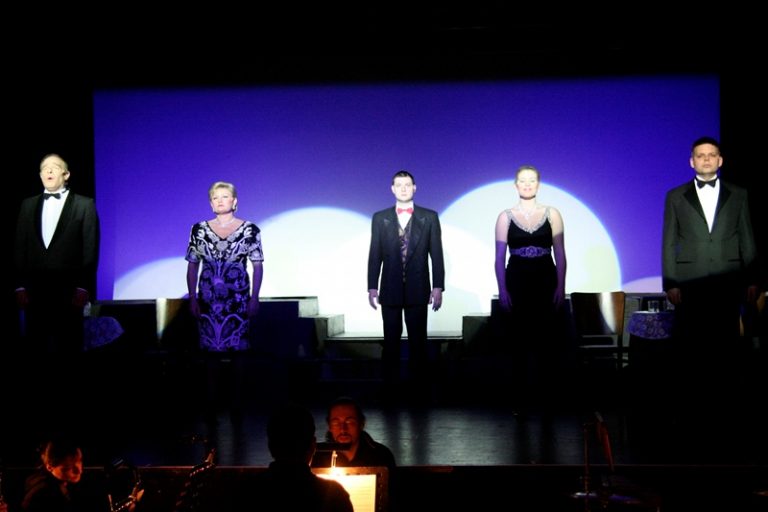 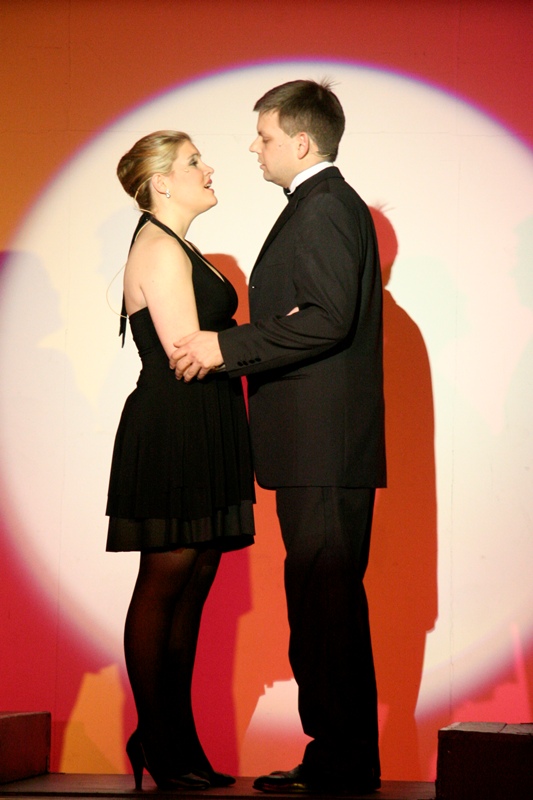 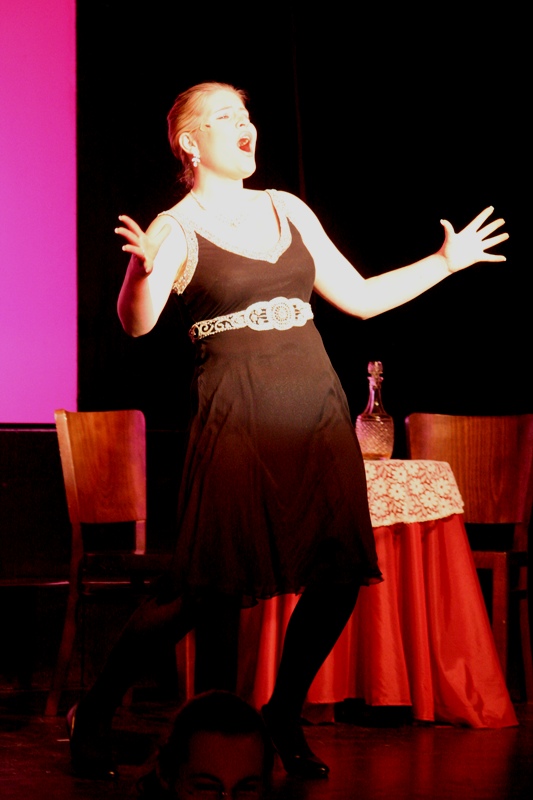 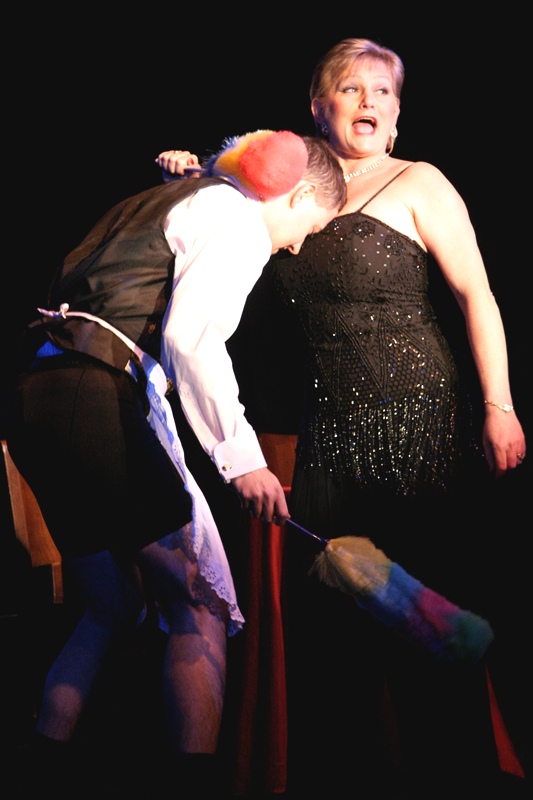 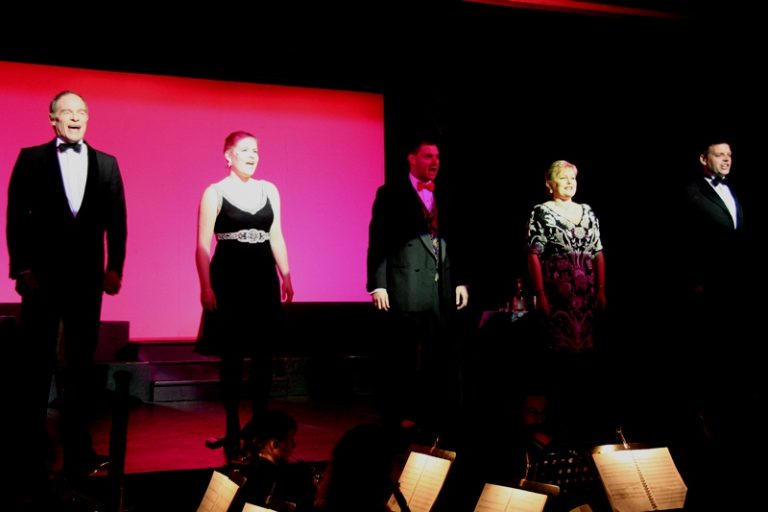 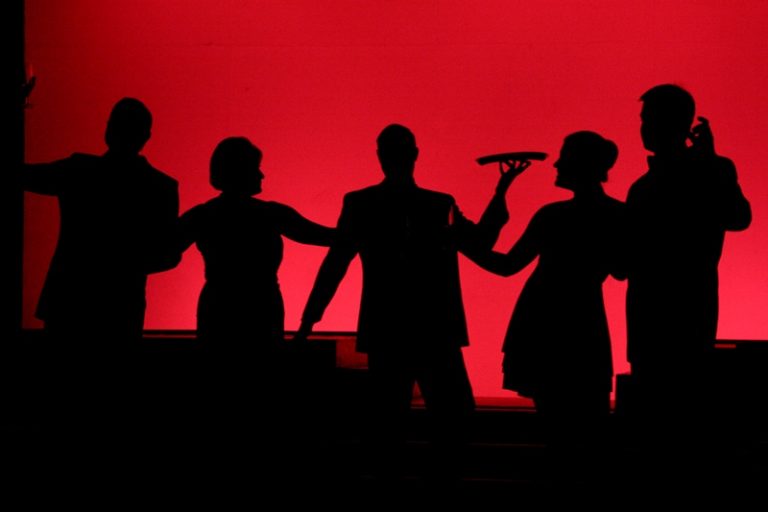 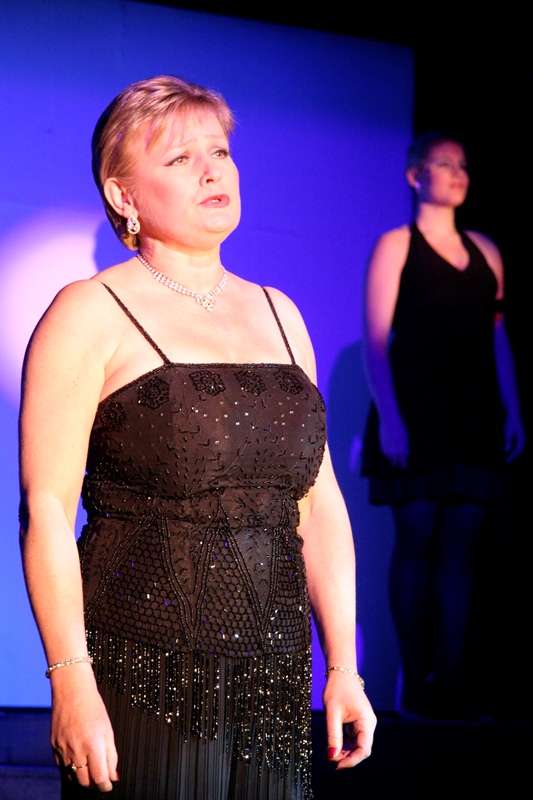 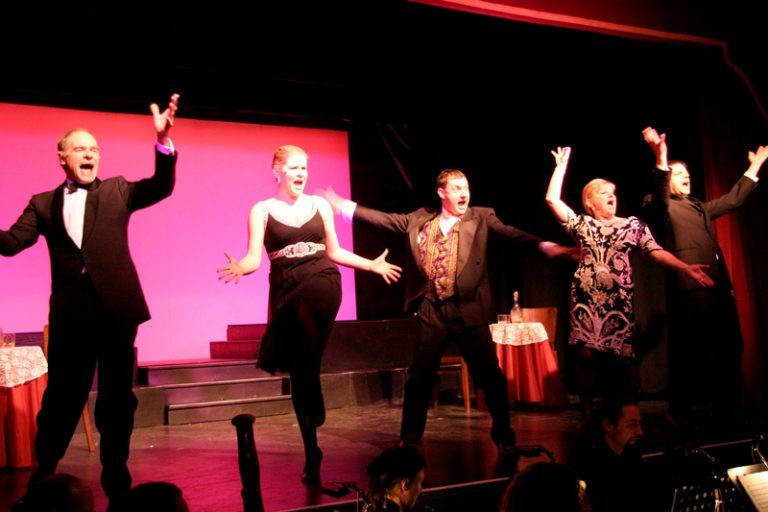 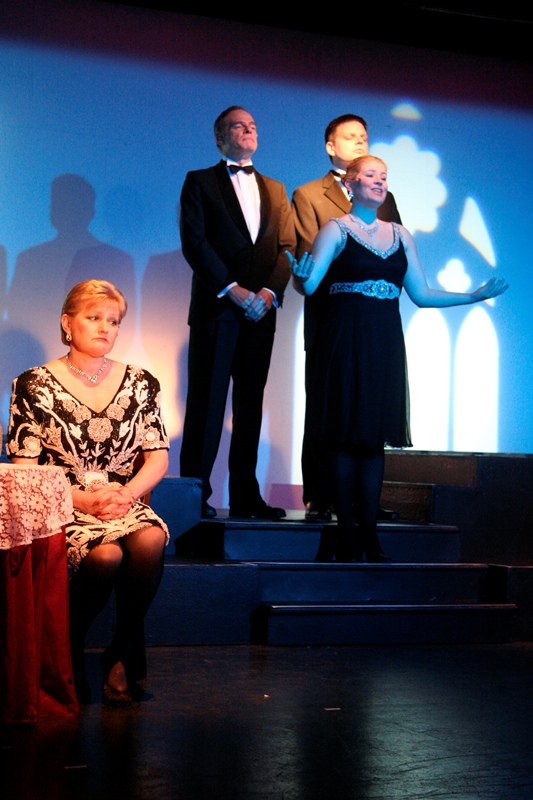 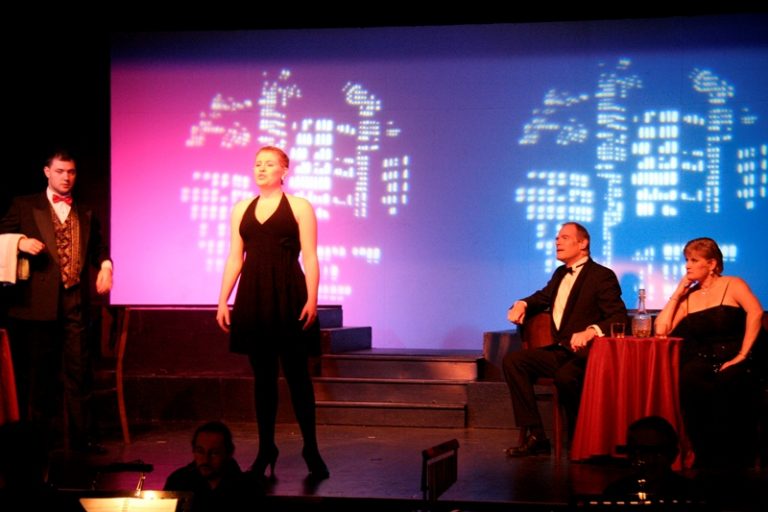 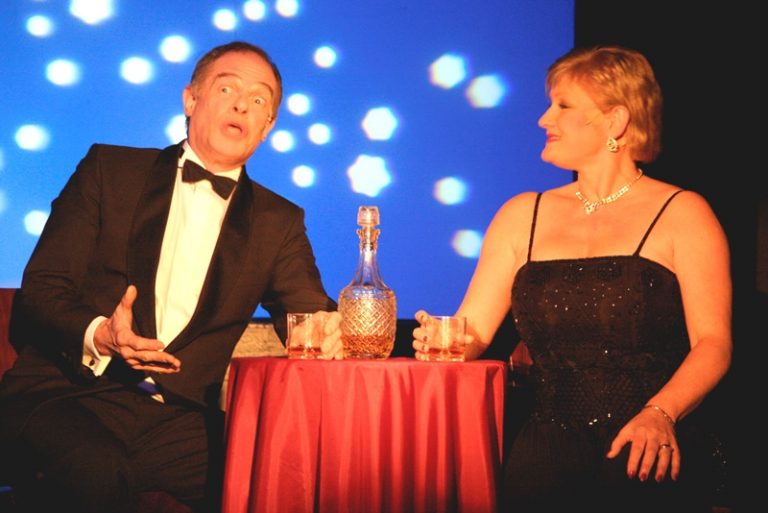 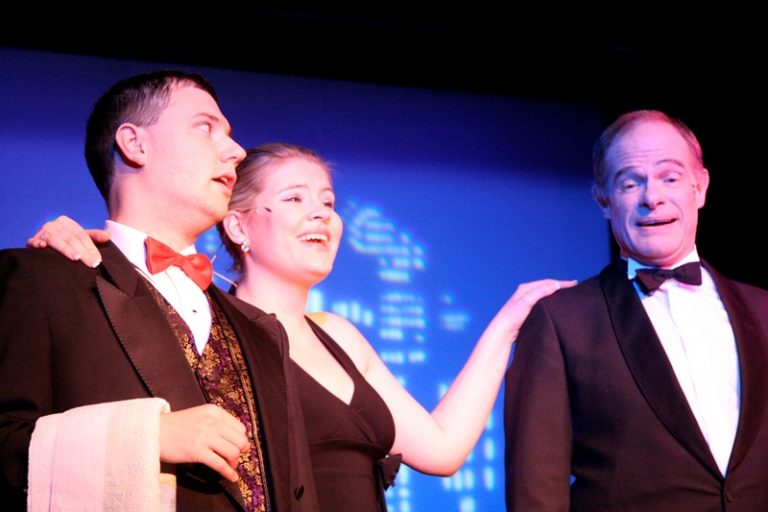 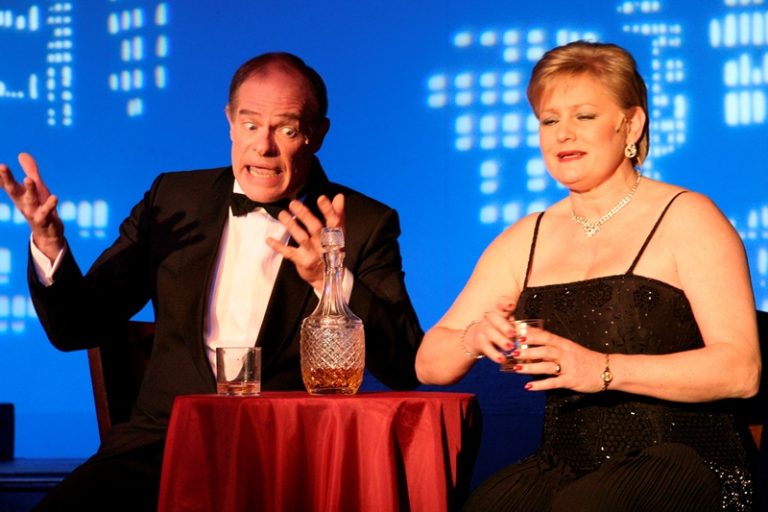 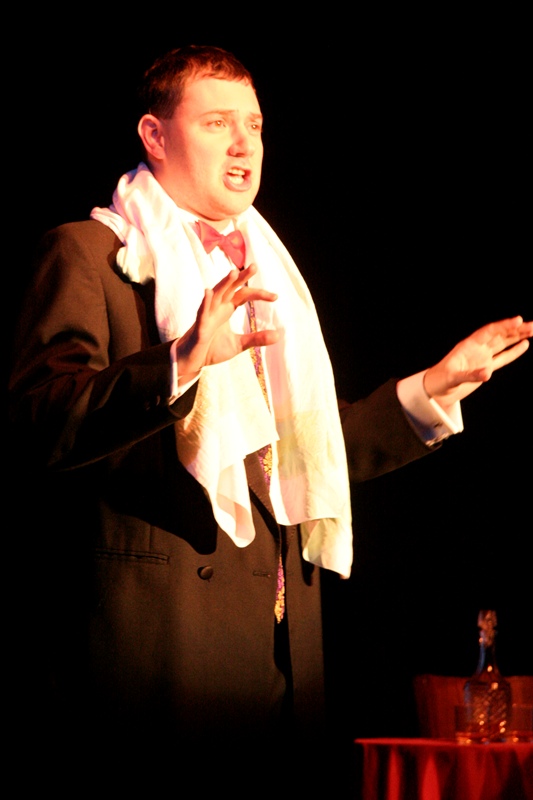 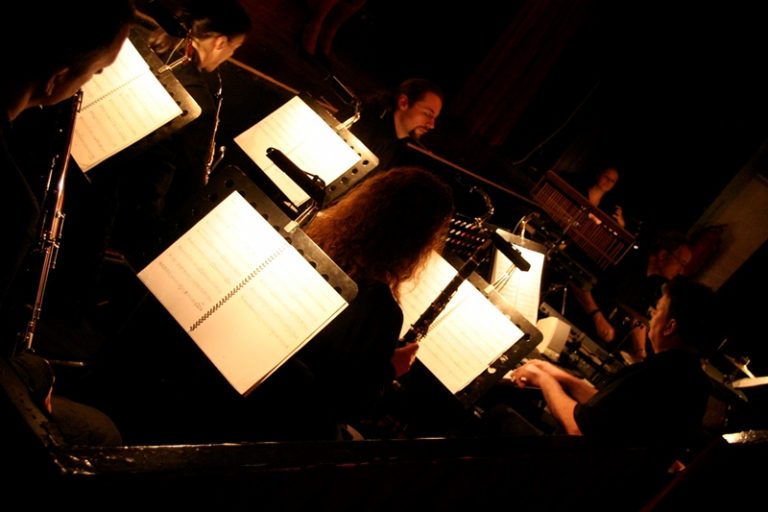 Sometimes when one is watching a production by a local society, you see someone so excellent that the thought occurs, why on earth didn't they make a career on the stage instead of some boring job in and office?

Then you read their biography in the programme and realize that though this may be an amdram production they are very much involved with professional theatre too.

The Barnstormers put on an incredible two hours of words and music by Stehen Sondheim called Putting It Together at the Barn Theatre, Oxted, with a style and panache that would have filled a London theatre - or indeed any professional theatre had they so wished.

Three men, two women, mother and daughter, perfromed songs from fifteen of Sondheim's musicals ranging from Sweeney Todd to Into the Woods (which was performed at The Barn in 2004).

Colin Warnock played all the parts for the more mature male roles, a wonderfully expressive face and a great voice. His matching partner for these roles was Teresa Skinner - super voice, wonderful costumes, and a polished sophistication in strong contrast to her most recent role of Mona in Best Little Whorehouse.

In many of Sondheim's musicals there is a contrast between a young and slightly more mature woman (usually over a man) and in this show the younger, very galmorous part, was played by Elizabeth Skinner, her daughter. Another wonderful voice and it was no surprise to learn she is off to college to train as a professional singer.

Richard Allen, who founded the Barnstormers eight years ago, directed the show as well as singing in it.

The opening night had all the polish and pacve of a very well tuned production. It was perfectly casted and had an extremely clever all-purpose set using a projected backcloth and good lighting.

Peter Calver was the young man about town for all those parts in the Sondheim musicals (along with Richard Allen) and it was no surprise to find that he sings professionally in opera. Polished, suave,a nd an excellent choice to open the show with Invocation to the Audience from Frogs.

A musical can be made or ruined by the orchestra and their director, Ian Skipper was excellent. With brass, woodwinds, two keyboards, bass and percussion, the sound was perfect and its level exactly right to accompany the singers.

This review of the music and lyrics of Stephen Sondheim follows on a previous selection from his earlier works 'Side by Side'.

Sondheim has often been accused of being too clever by far with compositions heavily into counterpoint, diatonic harmony and dissonance for effect. He has been a success without being too commercial, always leaving us unsure where his songs are going next.

As a lyricist he has the sophistication of Cole Porter and follows the rhyming pattern pioneered by Lorenz Hart to get away from the Moon, June fetich, so that now we get 'dustbin' rhymed with 'I've just bin'?

The Barnstormers production could be described as smooth, smart and sophisticated.

Three gentlemen in evening dress and two ladies in fashionable black dresses made a pleasant change from our current sartorial neglect.

Congratulations to directors Richard Allen and Martin Patrick and musical director Ian Skipper for providing a memorable evening and to choreographers Jolene and Sophie Kiddle for the superb movement to music, contrasting beautifully with memorable immobility.

Colin Warnock was the middle-aged man who could put a handle on a sophisticated lyric. Peter Calver, was MC with one word introductions and the possessor of a lubricious eye twinkle. Handsome Richard Allen was good with a romantic ballad and they all combined well.

Teresa and Elizabeth Skinner were femme fatales, the former singing the mature roles abetted by a face that mirrored her emotions and the latter with a belter of a voice who played the ingenue to perfection.