A play
by Arthur Miller

‘The Crucible’ is a dramatic and powerful play telling the story of how the small Puritan community of Salem, Massachusetts is stirred into madness by superstition, paranoia and malice, culminating in a thrilling and terrifying climax.

The story focuses upon a young farmer, his wife and a young servant girl who maliciously causes the wife’s arrest for witchcraft. The farmer brings the girl to court to admit the lie – and here, in this trial scene, is the thrilling climax of the piece. The farmer, instead of saving his wife, finds himself also accused, imprisoned and condemned.

Often hailed as one of the greatest plays of the twentieth century, this gripping historical drama draws chilling parallels between the witch-hunts of Salem and McCarthyism, which gripped America in the 1950’s.

The Crucible was produced by Richard Allen and directed by Paul Longhurst. Our Assistant Director was Fiona Steel.

Set design was by Bruce Reed and Paul Bowles and our Stage Manager was Richard Grogan.

The Director’s notes advised that a straw poll in his office had shown that though 8/10 have heard of Arthur Miller’s ‘The Crucible’, fewer than 1/10 have actually seen it. I can now count myself to be one of the lucky one’s. The fact that the play is a modern classic is no sure formula for a successful production. In deed the depth of talent required to make this onerous 4 Act play come alive was awesome, but the Barnstormers had that by the bucket-load.

In a production where every character had been faithfully researched and played it cannot go unmentioned that to a man (or woman) not only was the pace, diction and projection excellent, but the comprehension of the text was superb. Neither should it be ignored that, there were many occasions which required a good number of players to be on stage for some time just to ‘listen’, and how well they did it. The careful manoeuvring and grouping of players during such scenes had been well plotted by the Director to avoid it looking like a cattle market.

The Prologue was exact. A gauzed firelit woodland dance enacted by the young girls to a haunting melody mixed with reverberating youthful giggles set the tone perfectly for what was about to follow.

The pace and verve with which Philip Laughton, as the Reverend Samuel Parris, launched into the first Act epitomised the striving proud man he should be. A hardened man of the cloth who preached fire and damnation into the hearts of his congregation. The very torment of a man battling with his own beliefs and that of his parishioners was visible for all to see. Chris Chaplin as the Reverend John Hale was the perfect contrast. A quiet, calm and collected man, experienced in matters of witchcraft and more ready to accept that there is inherent good and evil in everyone. Both men delivered well rounded performances of their respective characters.

Steve Palmer gave an excellent portrayal of the central character John Proctor understanding the man throughout. The emotional rollercoaster was running true from his first sinister entrance, where we learned of his liaison with Abigail, through the guilt of having cheated on a weakened wife in a failing marriage, to his utter disbelief that the law should accept the spirited ramblings of the girls. But foremost must be his final scene where the broken man is faced with the torment of retracting his confession to keep his name rather than save his own life.

Claire Tibbalds gave a solid performance as Proctor’s hapless wife Elizabeth, though at times their relationship seemed to be somewhat staged to be cold rather than bear the feeling of an awkwardness and failing on both their parts.

Of the girls Camilla Rockley played the part of the vengeful and calculating Abigail to a tee. The free spirited leader of the girls, the flirty adolescent with Proctor, and the stone faced picture of innocence and virtue to Authority were totally in keeping with the role. Likewise, Lucy Coward as Mary Warren had done her homework. The unwitting follower of Abigail, a timid mouse who finds strength born out of her elevated position at the trials, was twice in the focus. First as she succumbed to her conscience to declare the whole event a ‘pretence’, but then later as she retracted her statement to reunite with the girls in a harrowing betrayal of the truth. The reuniting of Mary with the girls was one of the many highlights of the play and particularly well executed by the young girls. Worthy of equal mention was the truly spine-chilling confession of the servant Tituba (Celena Bain), who’s absolute terror at being accused of witchcraft was wholly believable and a terrific climax to end Act 1.

Jerry Phillips was every inch the man as Deputy Governor Danforth, holding court both literally and figuratively throughout the third Act. His timing and delivery combined with careful control of a booming voice commanded attention not only from those on stage, but also the entire audience.

The excellent 17th Century timber framed set had been carefully designed as a back wall with interchangeable panels to provide the required scene changes to each Act, with the whole frame moving downstage to provide the final set in the jail. The players were thus afforded the maximum working area of the stage at all times. To have the oak beams of the Barn Theatre as the backdrop for such a production as this was providence itself as each scene blended perfectly into the auditorium almost as if one were actually in the room with the players. The Director had wisely kept furniture and props to a minimum, but his attention to detail was obviously paramount. Was it my imagination, or did I really detect the aroma of ‘rabbit stew’ in the Proctor House at the opening of Act 2?

As well as providing a warm cameo role in the form of Rebecca Nurse, Elizabeth Callow had worked marvels in the wardrobe department to provide a very authentic set of costumes. Mention should be made of the excellent set of wigs which were totally in keeping with the time. The theory on makeup is that it is good if you don’t notice it, and that was generally the case, although one or two of the ladies were maybe a little too pretty for the hardy Puritan way of life.

Overall this was an exceptional piece of amateur theatre and the very hearty applause at the end of the evening from a praiseworthy audience had been well earned.

This is a humdinger of a play and with 23 in the cast. Congratulations are due to producer Richard Allen and director Paul Longhurst for the able way the troops are marshalled.

The distinction between superstition, religion and reason are brilliantly brought out in the dialogue in plain English not out of place for 1692.

No use is made of thee, thou, art, etc for which grateful thanks are given.

The girls are supposed to have danced naked in the forest and to have summoned Satan with their wild perambulations.

The Reverend Samuel Parris (Philip Laughton) has glimpsed his daughter naked as she returns home and she is put to bed in a disturbed state.

A believer in hell fire, he convinces with passion his concern for salvation, tempered with anxiety for his earthly position.

Lotti Davis as his daughter has the difficult task of lying comatose for the first ten minutes.

She is a good screamer, but then ladies have and inbuilt talent for it.

Tituba (Celena Bain) a slave from Barbados, sublimely portrayed her apparent admission that the dancing she taught is evil and the devil has been summoned.

Alan Merricks as "know all" Thomas Putnam knew that witchcraft is involved, convincing us that he believes it and is assisted in this by his wife Ann (Fiona Steel).

Abigail Williams (Camilla Rockley) is the ringleader of the bewitched girls and was a maid in the house of John Proctor (Steve Palmer).

They have an affair and we are led to believe that , having been shown the door by Mrs Proctor (Clare Tibbalds), she wreaks her revenge with the accusation that the girls are under the latter's control.

The uniform repetition of poor Mrs Proctor's speech and the movement by the girls is an effective theatrical device.

The foregoing parts are all handled with sensitivity and passion, especially when Steve Palmer and Clare Tibbalds are involved.

John Bennett, as Giles Corey, is forthright as the curmudgeonly friend of Proctor and suitably bewildered to find his wife tried for witchcraft because she reads books and won't let him see what they are.

A special word of praise for Jerry Phillips, as Deputy Governor Danforth, who is in charge of the Salem trials. His phrasing and articulation are of the highest order.

Elizabeth Callow, as Rebecca Nurse, is a dominating figure, refusing to admit her guilt when such an admission could save her life, and Chris Chaplin is suitably learned as the witchcraft expert, the Reverent John Hale.

The Barnstormers know their business and the ensemble playing is a delight. 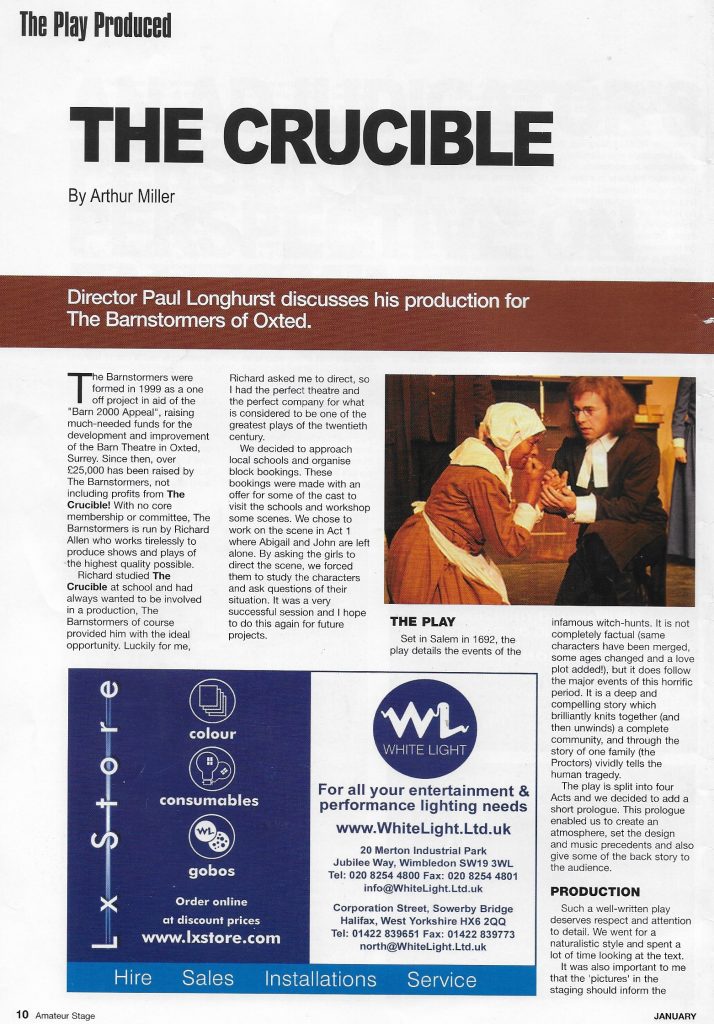 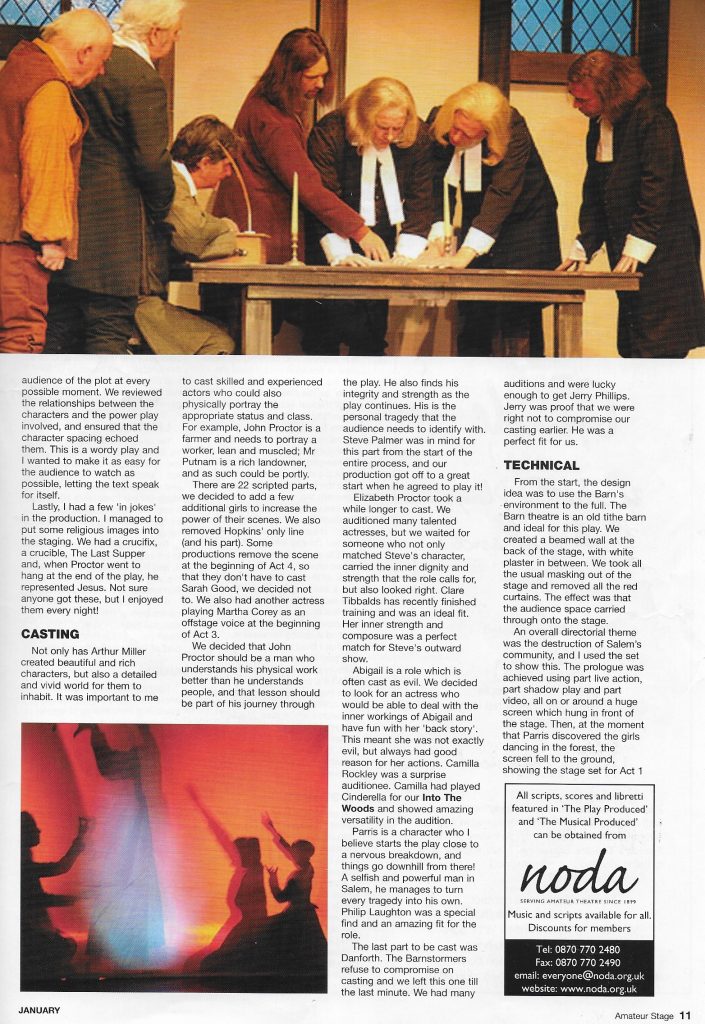 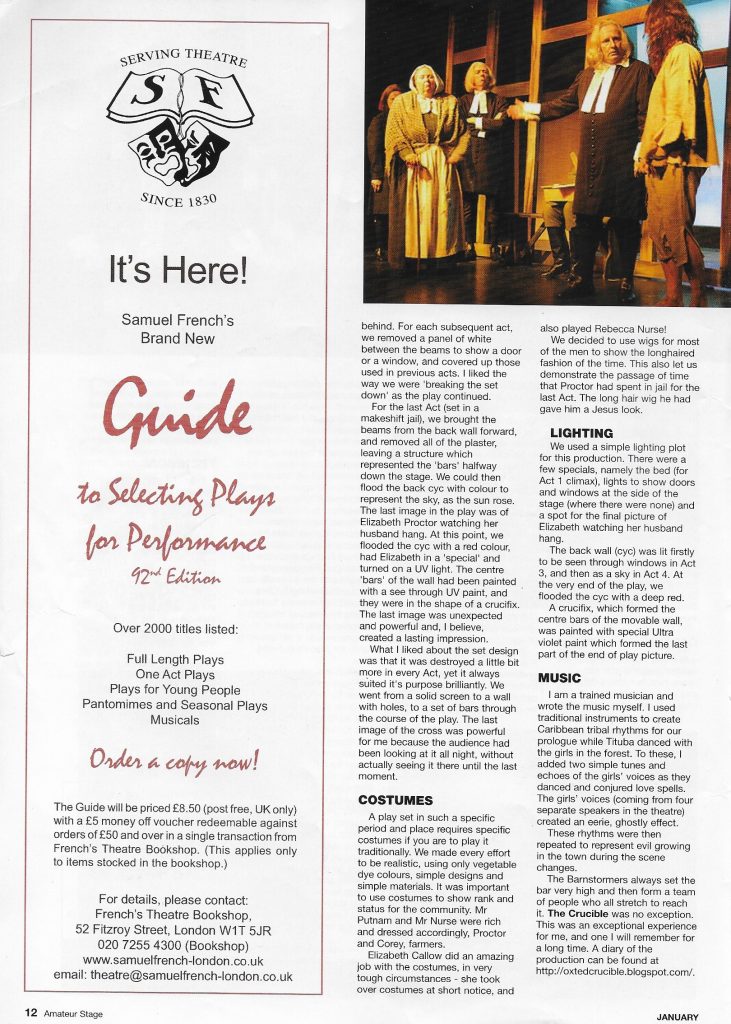